Over the next few months, we'll be getting to know a little more about each of the members of our Adventurers League Admin team. Our series continues with our Sensitivity & Inclusion Lead, Ma'at Crook! Ma'at [they/she] joined the team in January 2020.​

What's your role on the Adventurers Leage Admin team?

I’m the Sensitivity and Inclusion Lead! I read through DDAL in-house adventures and documents. To help writers and editors make their content even better, I list content warnings and note potential issues, like stereotypes, tropes, missing representation, and disrespectful language and portrayals. I give suggestions and ideas for changes they can make. In addition to sensitivity reading, I share information to help us all be more welcoming at our tables (like the Mist Hunter’s Safety Kit and Creating a Code of Conduct articles). To do this work, I also attend trainings related to inclusion, accessibility, and safety.

How did you get started playing tabletop games? In Adventurers League?

Astoundingly I’d lived well into adulthood without getting any further than D&D character creation. So, I reached out to some friends who set up a game. I loved it so much I wanted to play more often than they were able to. So, I googled “Play D&D” in my area and came across several entries for game stores. I chose a weekly group in Portland, Oregon, organized by Davena and Jared and attended by many wonderful adventurers!

I don't live in Portland anymore, and since the pandemic, I've been finding games through Discord and the monthly Virtual Play Weekend. Web searches bring up so many more options than before!

If your pet was an NPC, what class would they be? 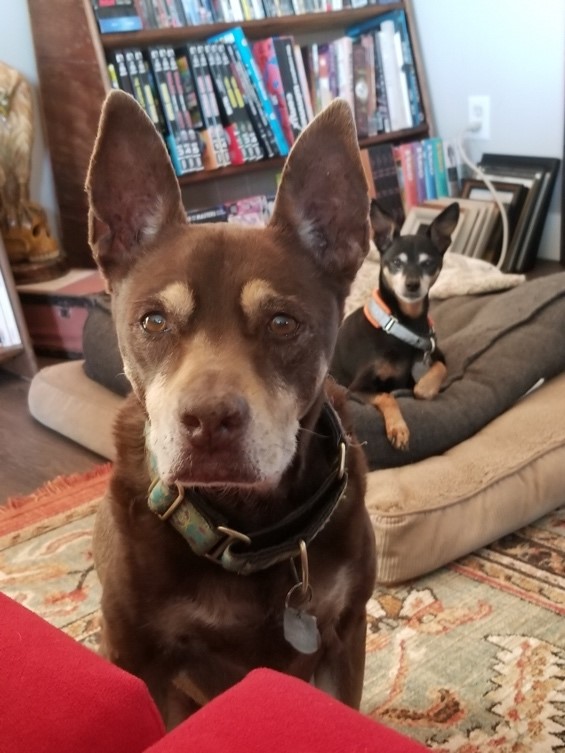 Tula Pants, our Australian Kelpie, would be a sporty Ranger. She loves running around outside, chasing critters, and playing catch.

Priscilla, our miniature pinscher and goblin, would multiclass in Rogue and Bard. Her naps are an artform. When she's awake, she's a scoundrel, sneaking into places she shouldn't be and taking what she shouldn't have.

Which monster would you want as a pet if they were real?

I want a Basilisk as my best spiky friend. Have you seen how cute and friendly they are?! Just look at their smile! Plus, they’d turn any unwanted spiders and flies that might sneak into your house into harmless, stone minifigs.

Where on social media can people find you?

Amy (she/her) is an avid gamer, baker, and knitter, and one of the Community Managers for the Adventurers League, the organized play system for 5th edition DnD. She's passionate about making gaming as welcoming and inclusive as possible. Amy is a cast member of #QuestfortheCure, a DnD actual play stream, which has raised more than $30,000 for Duchenne Muscular Dystrophy research, as well as Cyberpunk: Independence, a Cyberpunk Red actual play series airing Sunday evenings (ET) on Twitch.