Over the next few months, we'll be getting to know a little more about each of the members of our Adventurers League Admin team. First up is our newest Community Manager, Bee Zelda! Bee [they/them] joined the team in July 2021.

What's your role on the AL Admin team?

I am one of the social media managers for AL! With a focus on social media and influencer engagement. I have been a part of the tabletop community for quite a few years as an influencer in this space, so I would love to be able to utilize my platform and encourage a space where everyone can feel safe and have fun at the gaming table.

How did you get started playing tabletop games?

I got my start in tabletop gaming in 2017 when a friend from a fitness Facebook group reached out to me and asked me if I wanted to make a podcast called The Broadswords about Dungeons and Dragons. At the time I didn’t know a whole lot about the game, much less the system. But four years later, and I have been a part of the Podcast events hosted by WotC, played a one-shot with Chris Perkins, shared a stage with the McElroys and found ways to fully immerse myself in the world of Dungeons and Dragons. Tabletop gaming has been such a highlight in my life, I’ve made lifelong friends from this hobby and been able to tell the best collaborative stories with those friends.

Do you have a favorite type of character to play?

I have been going through a phase of warlocks lately. I know this is the class of character, but beyond that I always play the silly, make bad decisions that elevate the stakes of the adventure kind of character. I mostly have the chance to play in one-shot games for charity events, and the customization that I can put together with warlock subclasses is so much fun. And if I get to play at a high enough level, multi-classing is wonderful. In a game that I get to be as outrageous as possible, warlocks have been my go-to. I also like to try and create characters based on some of my favorite anime tropes like magical girls or super saiyans and being able to take that level of silliness but still contribute to a story and adventure is wonderful. 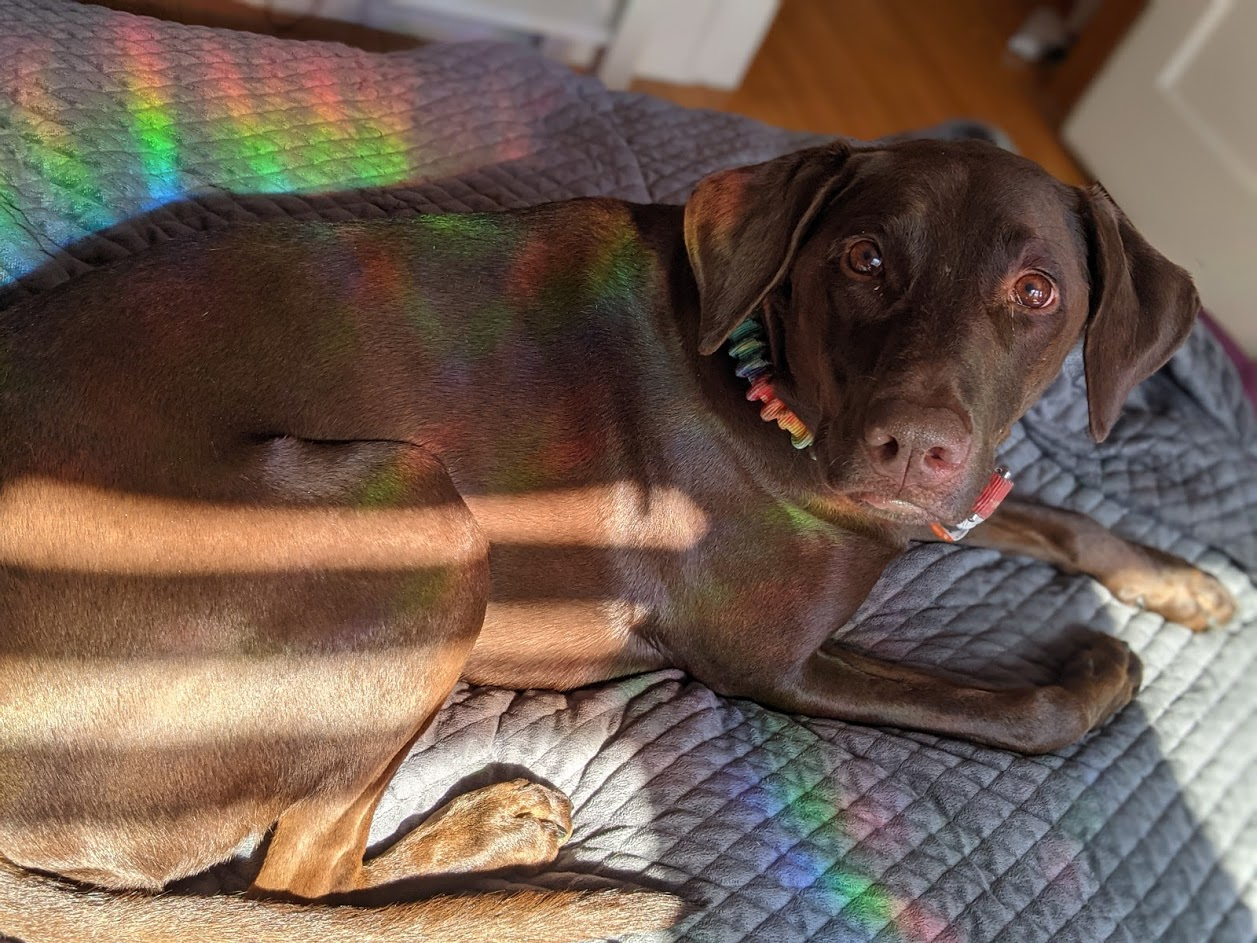 If your pet was an NPC what class would they be?

I have a wonderful 4 year old chocolate lab/ doberman. Her name is Ivysaur the #2 Pokemon, and she is a barbarian through and through. You look at her and you think, ok, this NPC looks like someone I could beat in an arm wrestle. And the next thing you know, Ivy has started charging at you and has covered your face in kisses. She has a multiattack where her tail will whip anything nearby as well. Once her turn is over, and the rage/ kisses have begun, you really have to wait the 10 turns before she’s tired. After a short rest though, she will be good to go again.

Where on social media can people find you?

I can be found on Twitter as @bee_zelda where I’ll have my streaming schedule available.
I am on Instagram as @bee_zelda_ where I share my cosplay lite looks as well as plenty of pet pictures.
If you want to listen to a D&D podcast, you can find The Broadswords in whatever podcast app you use!

Amy (she/her) is an avid gamer, baker, and knitter, and one of the Community Managers for the Adventurers League, the organized play system for 5th edition DnD. She's passionate about making gaming as welcoming and inclusive as possible. Amy is a cast member of #QuestfortheCure, a DnD actual play stream, which has raised more than $30,000 for Duchenne Muscular Dystrophy research, as well as Cyberpunk: Independence, a Cyberpunk Red actual play series airing Sunday evenings (ET) on Twitch.